Social Mobility and Class Rep, Cas, talks about the importance of intersectionality week.

In this blog, social Mobility and Class Rep, Cas, talks about the importance of intersectionality week and shares some facts on the topic.

Intersectionality provides an opportunity to explore how combined experiences of oppression can shape an individual’s experiences of the world (Crenshaw, 1991).

The Oxford Dictionary defines intersectionality as “the interconnected nature of social categorisations such as race, class, and gender, regarded as creating overlapping and interdependent systems of discrimination or disadvantage”.

This is a key study in academia in which when reminded of equality we must think beyond one singular characteristic, which is subject to discrimination and see the broader, intersectional characteristics. These categories are key in representing the ‘glass ceiling’ metaphor, which depicts the invisible barrier present which impedes those of low social hierarchy from achieving success without great difficulty as a result of this glass ceiling. To combat this we must: understand, educate, diversify, discuss and move forward actively against such measures. 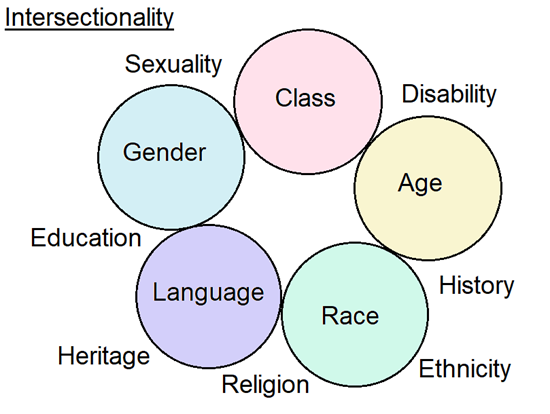 What can you do about it?

Check your privilege: All your social identities play into your ‘privilege’, even though you most likely haven’t asked for it. To be a good ally reflect on these privileges and consider how these impacts others.

Listen and learn: At its very core, intersectionality is about learning and understanding views from other discriminated against social categorisations. Listen to what people of these marginalization’s have to say. However, keep in mind it’s not their responsibility to educate people on their experiences.

Make space: Ask yourself if you’re the right person to speak on certain issues or whether someone of lived experiences would be a better representation of such areas. Don’t speak on their behalf and don’t speak over their voices.

Watch your language: So many of the words we use every day are exclusionary and downright offensive to marginalsed communities. Recognise and correct your use of such terms with further research and hopefully from what you learn this week. Keynote is to accept criticism and call others out; it is letting language of this nature slide which promotes its use and existence in modern day. It might just be your friend, a family member or even an acquaintance but the first step to not tolerating such promotes better intersectionality to its root.

Throughout the week each day will consist of themes of these social categories discussing their experiences and educating our community on their intersectionality’s; the plan for this week being available at @husu_mobility_and_class_rep or facebook.com/huumobilityrep. In addition, updates will be available on all of Hull University Students’ Unions media platforms.

Today I will be focusing on social mobility and class as a whole and the origins of many of our issues and key movements.

When it comes from the ability to move upwards in the societal hierarchy there is typically a happiness for most to move up, while those at the top of the hierarchy would prefer to halt this climb. The main issue arises when people are unwilling to move down which is necessary to achieve full social mobility. This mobility is key for fairness and for efficiency, as it would be key for economic growth to reach the social mobility benchmark as this could equal worth of 150bn per annum. In terms of social mobility internationally the British standards is at an international low and does not appear to be improving. A key truth of social mobility is being able to break the cycle through education however this education must be accessible and of equal standard for all to achieve such a feat. This is frightening as university is of the top determinant of later opportunities, pre-18 being key attainment years. To conquer this, it is pivotal that our education quality is of high standard and we continue to provide opportunities to include all students such as foundation years, no detriment policies and clearing opportunities to give those from such backgrounds the chance to break the glass ceiling and move up within social mobility.

Class struggles and the demonization of the working class

Working class: ‘’The social group consisting of people who are employed for wages, especially in manual or industrial work’’.

Middle class: "A social group that consists of well-educated people such as doctors, lawyers and teachers, who have good jobs and are not poor but not very rich.’’

There are so many conflicts around these social groups as there is no official pay category, no true definition and many different factors. However, historically the working class have been demonised and more so than ever in recent years as we work in a ‘’work-less Britain’’. Constantly being associated with benefit scrounging and being ‘’lazy’’.

This can arguably be traced back to how Margaret Thatcher stigmatised the working class. It can be suggested that she saw poverty as each individual’s responsibility to get themselves out of and refused to acknowledge the hoarding of wealth and power within certain classes. This can be visible in her destruction of the trade union which meant a lot of manual laborer’s went underpaid. She arguably imposed rules after the winter of discontent was used as propaganda against these trade unions. This punished strikers or their demands for better working conditions, which led to the deindustrialisation of the UK in which many factories and manual work went under. Some have suggested that Thatcher wanted a middle-class society by introducing schemes such as the right to buy scheme; allowing those who lived in council houses to purchase their property from the government at a discounted price dependent on the time they’d been occupying. Not everyone could afford to get on the property market however and not enough houses were being built in comparison to the rates of those being bought. This was conceivably an attempt to destroy the working class.

Since then, jobs have been replaced with low paid service jobs and those with better livable wages are extremely locked behind educational barriers. Demonising the working class as them being they as they deserve to be as they ‘could get out if they wanted to’. The working class being seen as lazy has resulted in a lack of representation in politics and the attack of policies which are there as safety nets to working class individuals. This propaganda against the working class is arguably visible within the representation of such in entertainment and media. This can be seen in comparisons between older shows such as only fools and horses which romanticizes and glosses over the struggles of working class; without demonizing. In comparison to modern media such as The Jeremy Kyle Show, Wife Swap and The Little Book of Chavs, which depicts working class as low valued job workers who are essentially ‘scum’ and describes ‘working-class bashing’ as necessary to promote social mobility. Wife swap especially appealing to middle class family in which typically middle-class families swapped with dysfunctional working-class families as entertainment to show how uncivilized working class are. Jeremy Kyle being the pinnacle of demonization in the name of entertainment showing working class as nothing but benefit seekers, drug addicts and dysfunctional.

It is these demonisation’s which normalise the bashing of working-class and promote the normality around this toxic behaviour and attitude towards the social group. This is a deep-rooted problem which needs more awareness and education around the topic to truly break the cycle of this interpretation. It all starts with acknowledging this negative stereotype and calling out such discrimination when it is witnessed to truly break this repetition of our countries failing social mobility. Without such acknowledgement and awareness, we will never reach social mobility equal to our international neighbours and the decline against working class will remain stagnant and gatekept.