Remembering African troops Exposed to the Warfront During WW1

Following Remebrance Day and Armistice Day, in his latest blog President, Education, Simeon Orduen educates us on the impact WW1 AND WW2 had on different groups of African soldiers and families.

Last year at remembrance, I wrote an article to lend my voice and join up with the voices of others out there ensure that the contributions of Africans during the war, many of whom were press-ganged into this by the colonial powers of the time.

There appears to be some sort of amnesia – a forgetting of these men and women – who knew nothing of how these conflicts came to be, ended up at the very frontlines. The very first soldier in British service to fire a shot in the war was of Ghanaian descent, or rather what was then known as the British Gold Coast

The war is said to have ended on the 11th of November, 1918; but in truth, it is more accurate to say that the ceasefire had been signed on the day, not that the war in fact also ended on the same day. The allied forces were still fighting in Zambia long after the ceasefire agreement had been signed. There are some reasons usually given for this; one is that the telegraph message was “not sent through till the 13th because the people of Broken Hill (now Kabwe) had such a celebration that they forgot to send it. The German troops were still fighting with Northern Rhodesian troops by the Chambeshi River till they received official notification on 14 November.”

Another is that the allied forces had been trying to capture Major General Paul von Lettow-Vorbeck, a German commander. He had been evading the Allies for 4 years at this point and his forces were scattered across the region. Both sides clashed again on the 12th of November 1918 and the commander received notice that the war had ended later on. A truce was in order and the commander surrendered his troops formally at Abercorn on the 25 November, 1918.

Africans of the time were under different colonial masters and were grouped into various military groups. Some of these are the:

It is important to note that the Tenga Tenga were not soldiers but civilians who were exposed on the war frontline due to being conscripted. One of the rather untold stories makes mention of a king, the Barotse King Litunga, King Lewanika I, who offered 2,000 subjects as war carriers and even offered his own son, Mwanawina III to serve as the commander of Barostse Carriers in East Africa from 1916 until the declaration of the ceasefire signifying the end of the war on November 25th, 1918. He was honoured with medals upon his return at the end of the war. Despite this, his name is not among those listed on any memorials

As the war got more intense, the British began to conscript women to the war as carriers. This form of conscription only happened in the colonies, exposing both men and women to the dangers of the warfront in the process. So vast was the conscription of carriers that large parts of the country were massively depopulated afterwards.

In a statement by the director of the Lusaka National Museum in Zambia, Victoria Chitungu, she said, “Official figures estimated that the average carrier or porter travelled over 15km per day and seven days a week. The net load was 60kg to which was added the carrier’s cooking pots and blankets.” The British army required up to six carriers per soldier and the carriers were commandeered to carry food, equipment and ammunition. 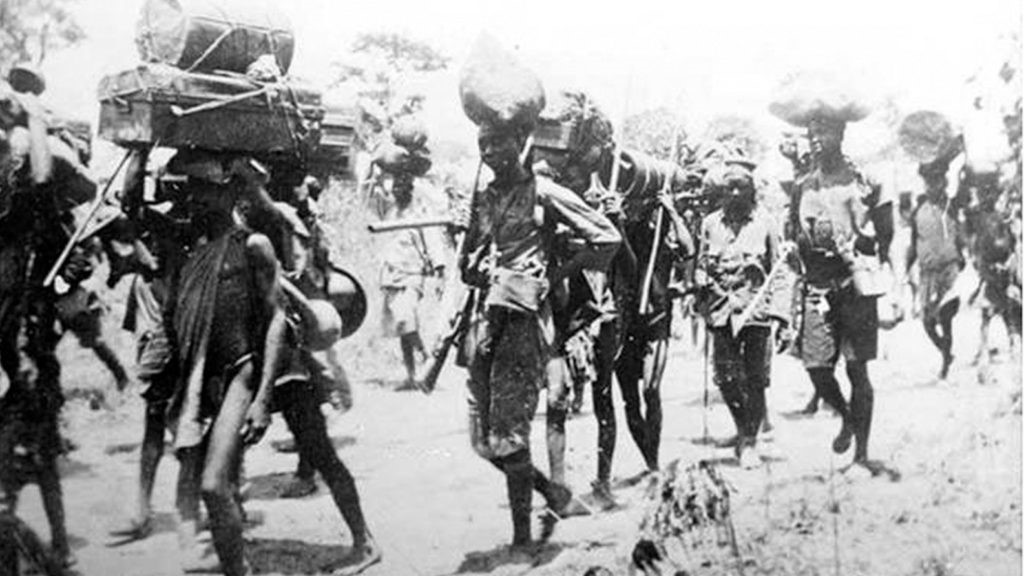 Above: World War carrier corps recruited by the British army would cover a distance of 15 kilometres every day with loads weighing an average of 60 kilogrammes. Image: LUSAKA NATIONAL MUSEUM ARCHIVES

They were created by the French in 1857 primarily as a mercenary force composed of slaves and Africans from some of the lowest social class, although there were a handful of well-to-do Africans who served mostly in the capacity of “intermediaries.” The rachat (repurchase) system of slave purchase (was employed by the French in obtaining soldiers, and although the practice officially ended in 1882, coercive tactics akin to slave purchasing still continued despite the abolishing of slave trade over 50 years ago at the time.

The following is a portion take from an article of the same name:

“Sent to the front in France from the first weeks of the war, the tirailleurs saw a great deal of combat. This was largely because French army commanders viewed West Africans as an elite fighting force among the 500,000 colonial subjects (from Algeria, Tunisia, Morocco, Madagascar, and Indochina) who fought for France during the war, and so deployed tirailleurs sénégalais most often as attacking “shock troops.” Conventional wisdom in the army held that West Africans’ alleged primitive savagery made them ideal for the offensive and rapid frontal assaults, but their less-developed nervous systems and childlike simplicity rendered them fearful and undependable under sustained bombardment and in static activities such as holding frontline trenches. In short, French officers regarded West Africans in general as a “martial race,” or race guerrière, and this racialized vision of inherent military aptitude structured West Africans’ experiences from recruitment to deployment, and beyond.”

They were considered “savage” because of the colour of their skins and their different way of life. The Martial race designation was created by the British in India after the Indian Rebellion of 1857. This classified the various castes according to martial or non-martial, martial meaning “typically brave and well-built for fighting” and non-martial basically meaning the opposite. The French adopted this model and applied it in the conscription and deployment of West Africans from their colonies during the war. More on this can be found in the Journal Article by Gavin Rand titled “Martial races’ and ‘imperial subjects’: violence and governance in colonial India, 1857–1914,” for those curious and wanting to read about how martial race classifications came about.

This group of soldiers were known for being highly effective and dedicated, so much so that after the war and Germany’s defeat, they have been celebrated for their service to Germany.

On the back of all this was the Conscription Law. Mass conscriptions began during the first world war when the British government passed the Military Service Act in January 1916 of which Winston Churchill was an advocate: this act specifically stated that single men aged 18 to 40 years old were liable to be called up for military service unless they were widowed with children or ministers of a religion. As the war carried on, the age was raised to 51, with some clergy enlisting during the war despite exemption.

It must be said at this point that the British conscription of military forces at the time was a bit more systematic than simply conscripting military forces from the male populace; they mobilised troops from particular ethnic groups in Western Africa, with particular preference for Hausa, Yoruba, Wangara, tribes from Ghana such as the Grushi Kanjarga. This sort of ethnic preference was not just done for military purposes but for other parts/sectors of the colonies as well. Could it also be that such preference of ethnic groups within these colonies left notions of “ethnic superiority” embedded in the minds of these now post-colonial states, leading to the divides that have led to lot of the inter-ethnic group crisis that engulfed these nations soon after independence for which ethnic group is the better and still engulfs them to this day? The inter-tribal clashes for supremacy and leadership in countries like Nigeria leading up to the civil war, which although not directly caused by colonialism, were exacerbated by the exclusionary identity politics they introduced in a bid to apply their renowned “divide & rule” system which required sharp ethnic & religious differences amongst its populace points very clearly to how broken & scarred colonial rule leaves countries long after their independence. Perhaps an argument/conversation for another day. 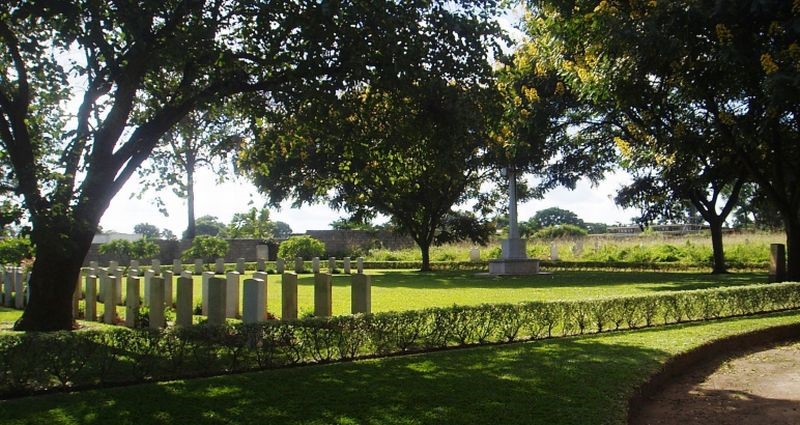 A quote from the Kaiser’s cross says regarding the commemoration of the fallen from the war:

“All the Allied dead were buried where they fell.  After the war the British European dead were re-buried in a Commonwealth War Graves Commission plot in Ndola Kansenshi Cemetery.  The African dead of the Northern Rhodesia Police are commemorated by name on the Livingstone Camp Memorial.  Un-named and unknown dead Northern Rhodesian porters are commemorated by the Abercorn Memorial.  All these locations are in Zambia.”

Allied dead referring to the African men and women who were conscripted en-masse to the war front and died, only to be forgotten, their mass graves allowed to turn to bush.

It is my hope that people all around the world will abandon the conventional way of thinking and the construct that sees the African continent as a “backwater” continent, that only sees the continent as a group of “second or third world countries,” strengthening the chains the bind Africans to being treated as second class citizens everywhere including in their own countries. You only need to pause and take look at the crisis in Congo, where children of less than 7 years of age are taken to mines to mine the cobalt used in making the batteries that power most, if not all mobile phones to see how Africans are still being subjected to treatments in their own countries by foreign internationals who would not dare do the same to their own countrymen, but do these things to Africans year on year.

I hope that the pain that Africa and other former colonies have endured and still endure be openly acknowledged & addressed; the exploitation and crimes committed against Africans, and role that Africa has played in shaping the world we now live in – including the war – be openly acknowledged; and most of all that Africa is finally seen as an equal and treated as such along with all her people, wherever they may be.